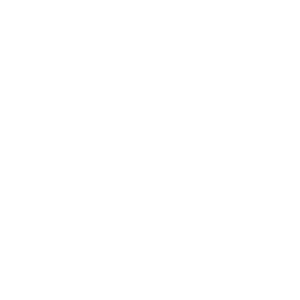 This moated castle has a history that goes back to the 13th century. After its heyday in the 17th century, the castle fell into ruin. Jan Toye was the driving force who revitalised Diepensteyn and restored it to its former glory.

The feudal fief of Diepensteyn was founded around 1290, when Daneel I van Boechout had a stone keep built on the marshland next to the brook that marked the border between the fiefdoms belonging to the Boechouts and those belonging to the Berthouts. The name Diepensteyn – meaning 'stone in the depths' – refers to the castle's origins. The site was part of the military strongholds owned by Jan I, Duke of Brabant. The Van Boechouts, faithful vassals of the duke, had to curb the Berthouts' lust for power (the Berthouts were the lords of Grimbergen) and monitor the key road leading from the expansive County of Flanders. The keeps were gradually reinforced until they became a castle with walls and a moat.

After around two centuries in the hands of Van Boechout, Diepensteyn lost its military significance. The Spanish merchant Alvaro de Almaras married Anna van Boechout in 1509, and he purchased Diepensteyn in 1517. He then demolished the wall surrounding the moat and built a 'house of pleasure' on its foundations. 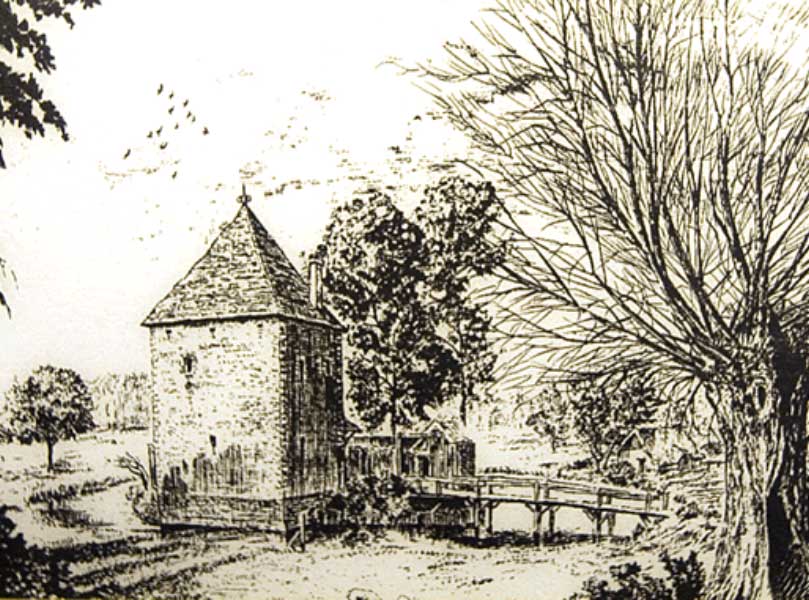 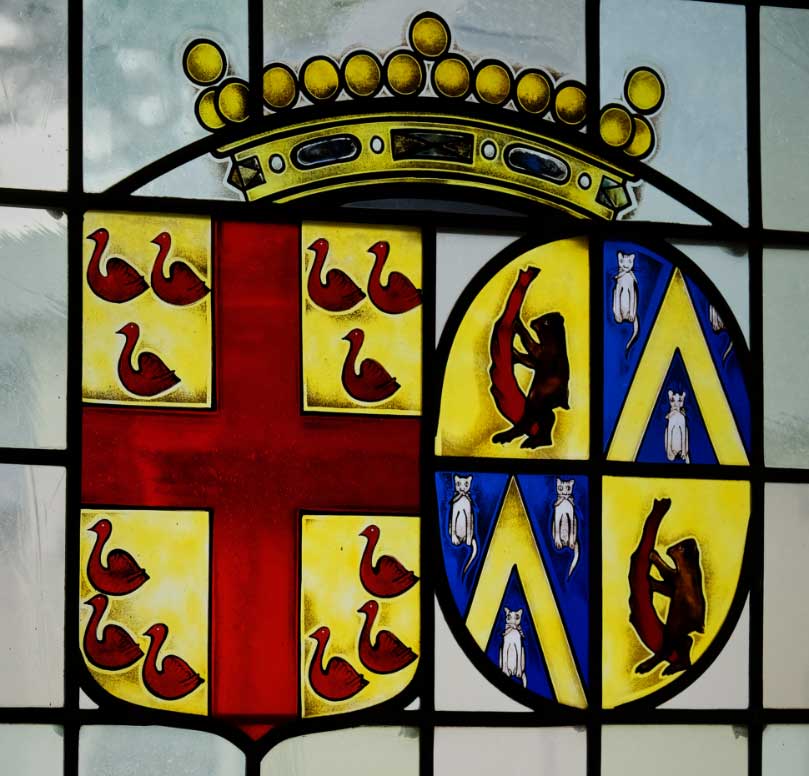 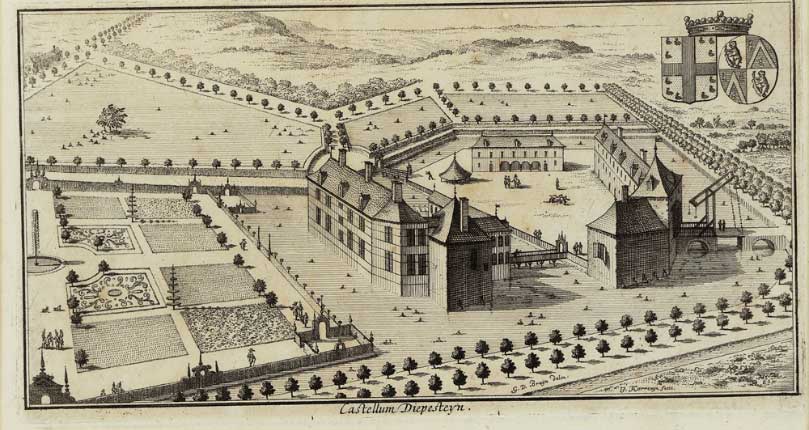 The 17th century was the golden era of Diepensteyn. In 1598, Diepensteyn came under the stewardship of Pierre Micault, knight of the Distinguished Order of the Golden Fleece. He carried out important refurbishment work and added an gallery with Venetian arcs (1616) and an house chapel (1618). In 1626, his son Frederick Micault purchased the title of 'Lord of Diepensteyn', and the alderman (the highest legal authority) of Steenhuffel, making him the ' Lord of Steenhuffel' as well. To confirm the appointment, he took the cat and mouse from his coat of arms and added it to the coat of arms of Steenhuffel. His brother Nicolas Micault, also a knight of the Distinguished Order of the Golden Fleece, was appointed by the Archdukes Albrecht and Isabella to negotiate the cessation of hostilities following the bloodbath caused by the Inquisition within the United Provinces of the Netherlands. His sister, Magdalena Micault, married Johan Kesseler, adviser and envoy to the king of Spain and the Archdukes Albrecht Isabella in Brussels.

His daughter, Isabelle Kesseler, married Count Ambrosius van Maldeghem, an occasion immortalised in the magnifying glass hanging above the castle's main entrance. They added a gatehouse, a coach house and horse stalls to Diepensteyn in 1675. In 1685, the Count received the title of Count of Steenhuffel from King Charles II of Spain. As a result, Steenhuffel became a county and the fiefdom of Diepensteyn entered its heyday, as evidenced by the etchings of Leroy in 1696. In 1720, Count Jean Dominique de Maldeghem gave his steward Theodoor Cornet the task of demolishing the second tower and the Venetian gallery with columns of blue limestone and renovating the access bridge. The fruits of this labour are inscribed on a commemorative stone on the bridge: 'J.D.D.M 1720 T.C.'.

Diepensteyn fell into decline at the end of the 18th century. In 1807, heiress Henriette van Maldeghem married Charles de Lalaing, knight of the Distinguished Order of the Golden Fleece and of the Order of Malta. The Lalaing family never inhabited Diepensteyn and allowed it to fall into ruin. By 1825, the keep, gatehouse, coach house and stalls were demolished. The castle building was turned into a farmhouse, and all of the castle's ramparts were gradually cushioned. 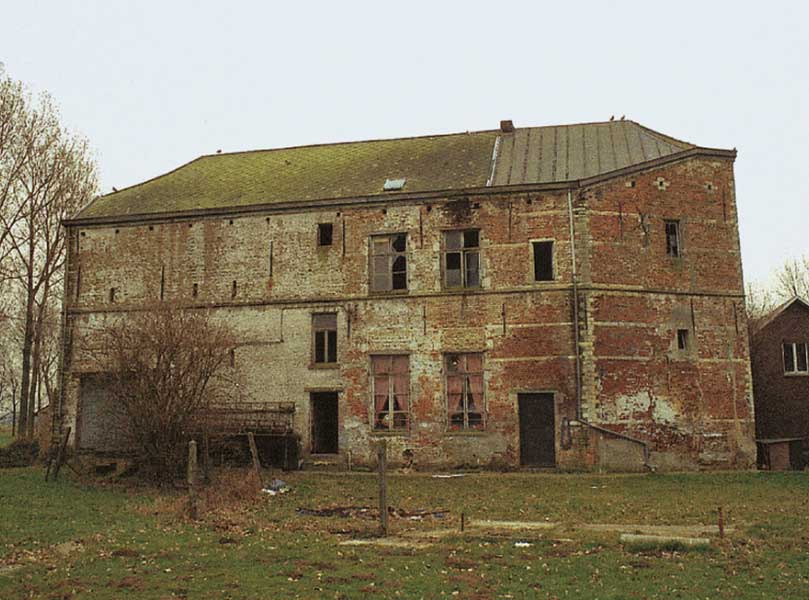 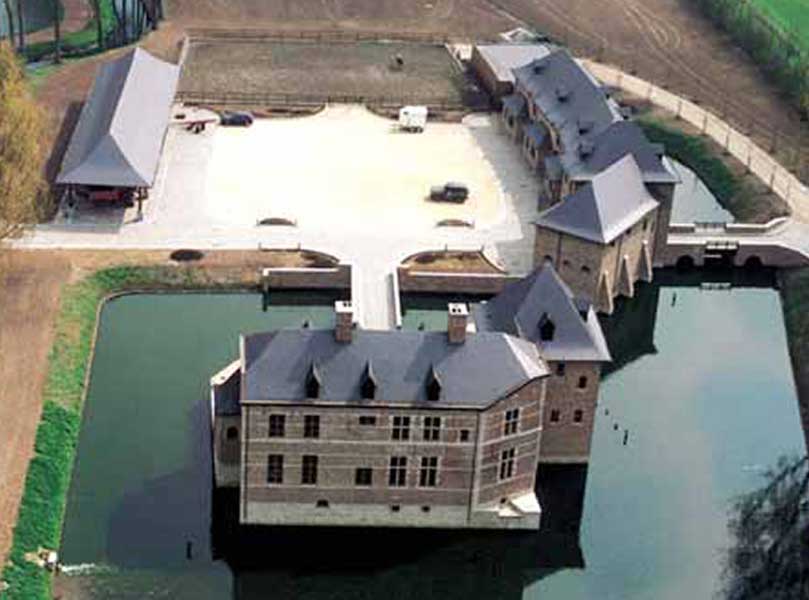 In 1985, Brouwerij Palm purchased the castle (or Kasteelke as it was known) along with the surrounding lands. Some was purchased from the Lalaing family, while the rest came from the De Boeck farm. After conducting in-depth historical and archaeological research, Jan Toye gave the go-ahead for the entire site to be rebuilt on its original foundations between 1993 and 1996. The castle's garden and surroundings were also restored to their former glory. Seminars and festive events could be held at the castle until 2017. The stalls and the coach house were turned into a stud farm in order to promote the Belgian draught horse, a piece of living heritage.

J&M ended its catering service at Diepensteyn in 2017. J&M would be pleased to assist you at other locations:

Between 2017 and 2019, the castle and stud farm were renovated from the ground up. Today, the castle is home to the headquarters of the single-family office Diepensteyn NV.